The Auction is a modern-day interactive murder mystery game for 12 to 40 guests, published by Murder Mystery Games Ltd.

(Note that if you click on the link below and then buy The AuctionI will earn a small amount of commission.) 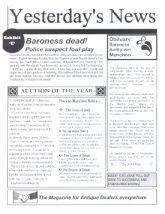 Newspaper from The Auction

Following the suspicious death of Baroness Audry von Munchen, the fabulous von Munchen relics are being auctioned off.

In the absence of a legal heir, the proceeds are to go to her favourite charity - unless a claimant comes forward.

At The Auction you will find yourself in a fascinating murder mystery of double-dealing, bribery and blackmail.

You will be in the middle of the action and it will be up to you to wheel and deal with the other guests.

Can you outbid the opposition, keep your secrets hidden and unmask the murderer?

What is the truth behind the Baroness' death?

Who will buy the von Munchen relics?

Find out at The Auction.

how the auction works

The Auction typically runs for two to four hours.

It is often played over a meal - a finger buffet if possible to allow guests to circulate and talk in private.

The Auction typically runs for two to four hours. It is often played over a meal - a finger buffet if possible to allow guests to circulate and talk in private.

On the evening, the guests are met by the organiser, Freddie Farr, the solicitor acting for the late Baroness. They then receive their detailed backgrounds - including dark secrets, objectives and money. When everyone has arrived the Baroness' will is read out.

The fun then begins as everyone questions, bribes and blackmails each other.

Everyone is trying to find out who murdered the Baroness, but they also have other objectives - and they decide how achieve them!

This is followed by the auction itself, when everyone competes against each other in a flurry of bidding.

Finally, everyone has the chance to make their accusations of who killed the Baroness before Inspector Clu d'Eau reveals all.

Stories from The Auction

"The game (The Auction) was a great hit, thanks from North Saanich Volunteer Fire Department. They want to do another one soon." Bruce Gray

The Auction is available from Murder Mystery Games Ltd and costs $44.99.

Purchasing The Auction is simple. Connect to the Murder Mystery Games Ltd website and follow the instructions! You will then receive information on how to download the main file almost immediately.

And please remember that if you buy The Auction you are buying it from Murder Mystery Games Ltd (the publishers). Don't forget to read their terms of trade.