Discover how to get a free murder mystery game - legally!

Writing a murder mystery game takes time and effort - so it’s not often that you can get one for free.

(At least, not without stealing, which I hope nobody would do here.)

So here I describe a few genuinely legal ways of getting a free murder mystery game. 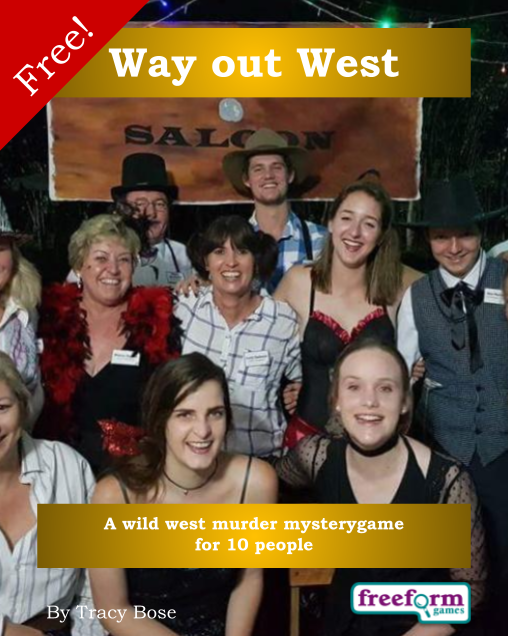 Their free version is only for ten players and the host, however.

If you need more characters, you will have to write them yourself (which is quite a bit of work!) or buy the full version.

But if you have ten players and want to try a free murder mystery game, I recommend Way out West.

Click here to get the free version of Way out West.

write your own murder mystery game

The time-consuming way to get a free murder mystery game is to write one yourself.

It will be completely free besides your time (and some paper and ink).

However, I’ve never liked valuing my time for nothing - my time is the most precious commodity I have.

So let’s imagine that I value my time at £5 per hour (that’s lower than I actually value it). And let’s say that I want to write a Hollywood-themed game for 20 people. If I spent more than about five hours writing, then I would have been better off just buying Hollywood Lies.

If I value my time in the terms that I’d pay a mechanic or plumber, then I have less than an hour to write the game. And trust me, Hollywood Lies took a lot, lot longer to write than 20 hours - and you have the additional security that it’s been tried and tested before it was released to the public.

You might have more luck getting a copy to review - or if you can generate some other publicity.

However, I know that if I was a publisher, I’d want some evidence that you really were going to write a review, and you might want to refer to where you have written other reviews.

Some companies are looking for external playtesters. The job of a playtester is to try out a game before it’s published so any kinks can be ironed out.

Usually, the games are pretty close to publication before going to playtest, and the significant problems should be sorted out.

If you do playtest a game, you will need to provide feedback - but there’s usually a simple form to do that.

If you write an extra character for one of the Freeform Games murder mystery games, and they like it, they will give you a free game as a reward.

Click here to learn more about writing an extra character.