A Dead Man's Chest is a pirate-themed murder mystery party for 12-16 guests (plus one host) published by Freeform Games.

(Note that if you click on the link below and then buy A Dead Man's Chest I will earn a small amount of commission.)

Set in 18th century Caribbean, A Dead Man's Chest takes place on the sleepy island of Santa Oloroso as rival pirate crews race to discover the location of Captain Flint's treasure - and uncover his murderer.

how a dead man's chest works

A Dead Man's Chest is an interactive murder mystery game. In an interactive game each guest has a full character with backstory, objectives and a list of people that they know.

They also have item cards (to represent all sorts of things - from pearls, to pirate cutlasses and of course Captain Flint's treasure) and Ability cards (that let them detect secrets find out information about other people).

A Dead Man's Chest has lots of different plots to keep everyone busy. For example, there is the Governor's daughter to rescue, negotiations with the locals, placating the volcano god - and of course a murder to solve and Captain Flint's treasure to find.

In my opinion, once you've played an interactive murder mystery game you won't want to try any other!

But don't just take my word for it!

Here are some customer stories about A Dead Man's Chest. 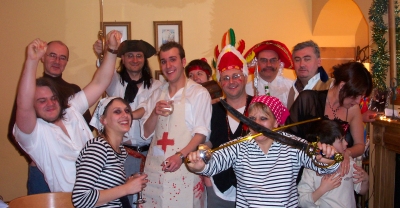 "We ran A Dead Man's Chest game on New Years Eve in Hull for a group of my former uni (Newcastle) mates, partners, family and friends. It went really well and was enjoyed by all. Among those taking part were three complete newbies and a good number of people who were just used to 'conventional' murder mystery games. The latter even said that they preferred this type of game." Nick Davison, Rochester, UK

The cast of A Dead Man's Chest includes:

Instead of a formal dinner party, A Dead Man's Chest is better suited to a buffet meal or finger food.

A Dead Man's Chest needs a dedicated host, someone to organise the game.

how to get a dead man's chest

A Dead Man's Chest is available from Freeform Games for $29.99 USD. 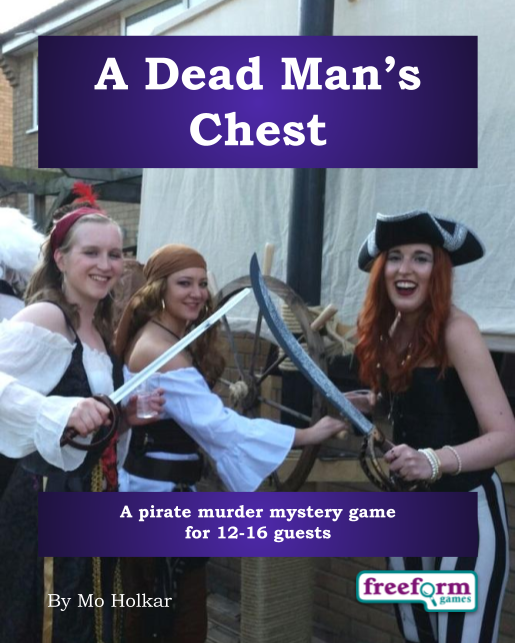 Disclosure: I am a partner at Freeform Games - feel free to ask me lots of questions! (I will also earn commission if you buy A  Dead Man's Chest.)