who shot the sheriff

Who Shot the Sheriff is an interactive murder mystery party for 12-15 guests (plus one host) published by Freeform Games.

(Note that if you click on the link below and then buy Who Shot the Sheriff I will earn a small amount of commission.) 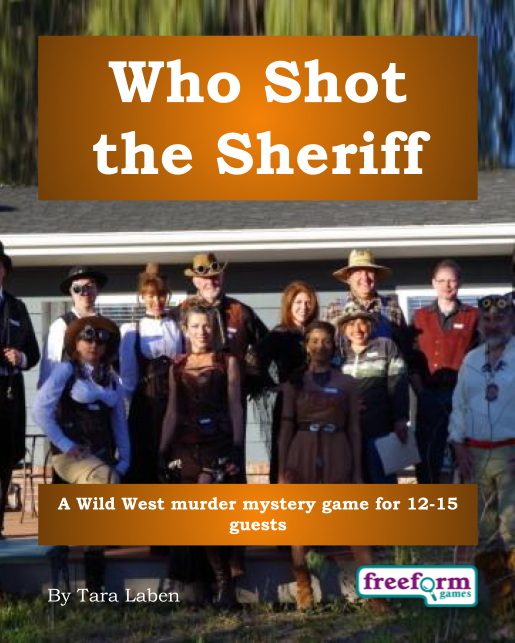 In 1869, two stagecoaches set out from the small town of Dustville on a three-day trip across the American West to San Francisco, following the gold rush.

After two days, the stagecoaches stop for a break at a ghost town called Buzzard Creek. Buzzard Creek is deserted save for a few old-timers and the employees of the Gold Nugget Saloon. Unfortunately, before the horses are ready, a dust storm approaches.

Then, gunshots ring out. In the stables, Sheriff Cassidy is found sprawled face-down with gunshot wounds in his back, his gun lying beside him.

With the passengers and townsfolk gathered in the Gold Nugget Saloon, the full force of the ferocious dust storm arrives, confining everyone inside.

Everyone, including Sheriff Cassidy's killer…

how who shot the sheriff works

Who Shot the Sheriff is an interactive murder mystery game, so all the players receive complete details of their character, including a detailed backstory, objectives that they must try to achieve, and information about other characters.

Charactes also have item cards (that represent guns, knives, wanted posters and so on), and abilities (that let them detect secrets find out information about other people).

The cast of Who Shot the Sheriff includes:

Instead of a formal dinner party, Who Shot the Sheriff is better suited to a buffet meal or finger food.

Who Shot the Sheriff also needs a dedicated host, someone to organise the game.

how to get who shot the sheriff

Who Shot the Sheriff is available from Freeform Games and costs $29.99 USD.

For more information about Who Shot the Sheriff, click here to download the free introductory pdf file which includes more details - including background, a full cast list, costume guide and invitations.

Disclosure: I am a partner at Freeform Games - feel free to ask me lots of questions! (I will also earn commission if you buy Who Shot the Sheriff.)