While I’ve not been shy about talking about murder mystery games during my day job (I’m a civil engineer), I’ve not aggressively promoted it either.

So it was nice when a member of our finance team asked if I would help them with a social event by running a murder mystery.

Here’s how that worked out. 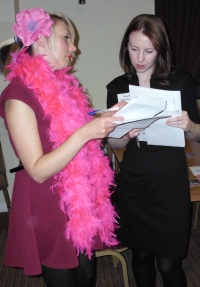 I was approached by Craig, a member of our finance team at work, about running a murder mystery as a team building exercise.

He would sort out the venue and food, I’d bring and host the game.

We discussed details such as the kind of venue needed and what sort of food (finger food or food that can be eaten on the go).

Craig had already consulted with the finance team, so we knew they were happy for a murder mystery and we thought we could get about 15-20 people for an event.

Craig liked the sound of Hollywood Lies, so that’s what we went with.

We agreed a date for late April, which gave us about seven weeks to prepare.

Craig booked the venue (a room in a working man’s club in Wakefield - cost £75) and then sent out invitations for a murder mystery and a curry or pizza.

At this stage we had 15 attendees, along with another 5 who said they may be able to attend. (That excluded me.)

As Hollywood Lies required a minimum of 16 players, we needed at least one more to confirm.

At this point I hadn’t circulated any details of the game - just that it was going to be a Hollywood-themed murder mystery.

To help prompt people to sign up, I emailed the cast list and the text below to the 18 sign-ups and the five or six maybes.

Moments later I had my first post - someone wanted to know about casting!

I sent out a provisional timetable and the location of the venue - and most importantly a cast list.

I cast everyone randomly, using the =rand() function in Excel.

I asked if anyone had their heart set on a particular character, but the feedback was that they’d prefer the casting was done randomly.

We charged £10 a head for the evening (to cover the food and venue) and today was the deadline for payment, at which point three people dropped out, bringing us to 16 players - the minimum for Hollywood Lies.

I decided not to send out character packs in advance.

We planned the evening so that the game itself doesn’t start until 8pm, with the meal (curry and pizza) first.

So that would give everyone plenty of time to read their characters.

An aside: The other reason for not sending out characters in advance is that this is my colleagues’ first Freeform Games murder mystery and I’m not sure that they wouldn’t talk about the game in advance. As I don’t want to spoil any of the surprises, I decided not to send the full characters beforehand.

one week to go 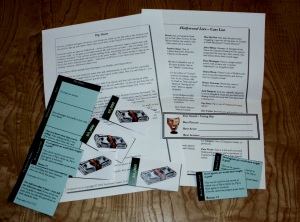 I printed everything out and sat in front of Game of Thrones cutting up item cards and money and packing everything into envelopes.

It took me about two hours in total - I might have been slightly quicker had I not been distracted by the DVD.

Instead of the supplied namebadges, I created stickers using address labels that fed through my printer.

(I was slightly concerned that some people might not want stickers on their expensive black tie clothes, so I also provided badges and badgeholders. In the end, everyone wanted a sticker.)

I also found a couple of noteboks for the autograph hunters, and gathered pens, blutack and other essentials for the evening.

I ran through a final check to ensure that everything was in place (as I won’t have any time on the day to check as it’s a full day at work for me).

I arrived at the venue at 6.30pm to see the room for the first time.

It was a nice large room with a bar and a small stage.

There were too many tables, so I moved some of them aside to create some clear space.

I also claimed a table in the corner where I could lay out all my materials (the character envelopes, handouts and things).

People started arriving about 6.45pm - and it was delightful to see them all in costume.

The last to arrive turned up at 7.30, by which time I was starting to get a bit worried as they included the murderer and I was worried they wouldn’t show!

We started eating at about 7.15, and as people finished I handed out the character envelopes.

By 7.45 everyone was ready, so we started the game.

I stood up and made a short announcement along the lines of the hosts introduction: I introduced everyone to the game, I named all the characters who weren’t present here tonight, and I then asked everyone to briefly introduce themselves.

Then it was time for everyone to start. 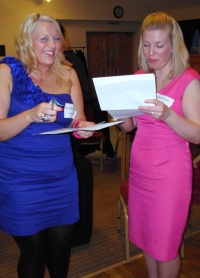 Anna de'Lessey and Zara Vicars discuss their next movie

An aside: As we had quite a few spare characters, I told the players that if they wanted to contact any of the absent characters, they could simply talk to me. Several of them did this. However, several of them also tried to “cheat” by using the absent characters to achieve their goals instead of interacting with the players present. I didn’t let them do this - it’s better for the game if they are talking and negotiating with the other players rather than with me!

I was surprised at how quickly the players tore through the plots.

I’m a bit used to experienced players rushing through the plots, but I didn’t expect my work colleagues to be so efficient.

On reflection I think that’s because we were at the minimum number of players - it would have taken longer with more people simply because there are more people to talk to.

Anyway, at about 9.45 the game was pretty much wrapped up and I called everything to an end. It was time to screen the movies.

If you’re not familiar with Hollywood Lies, the game includes a movie-making competition which partly involves getting actors, a director and the like.

And then, at the end of the game, the film crews put together a little sketch (which everyone uses to vote for the Best Picture, Best Actor and Best Actress).

The sketch is no more than a short scene from their movie, and is worked out during the game by the producer and the crew. We had two fabulous scenes - “Death on the Gambia” and “Curse of the Pharaoh”. 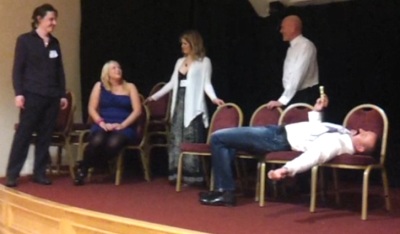 With the movies over, it was time to solve the murder.

I gathered everyone together and asked them to point to who they thought was the murderer.

Then I read out the solution.

To my pleasant surprise only two people guessed the murderer correctly.

It was about 10.15, at which point everyone moved to the bar and swapped war stories.

overall - and a bit of feedback

So overall it was an excellent evening and provided a real talking point at work over the next couple of days.

I know that everyone is keen to do another at some point.

I received one suggestion about the end that I may take on board next time I run a murder mystery: At the end, instead of asking everyone to point to the murder, get each person to state who they think the murderer is, and why. And once everyone has done that read out the solution.

That might provide a bit more drama to the event - we’ll see.