In June 2020, with the coronavirus lockdown continuing and preventing groups from meeting up and playing murder mystery freeforms face-to-face, I decided to host The Karma Club online.

Most of my players were in the UK (where I live), but were scattered all over the country. I did have one international player - one of the players was on the East Coast in the USA. So while we were playing in mid-afternoon, they were playing in the morning.

In short: We had a few technical problems, but it worked well. A bit of practice and this will only get better.

So here’s what I did. 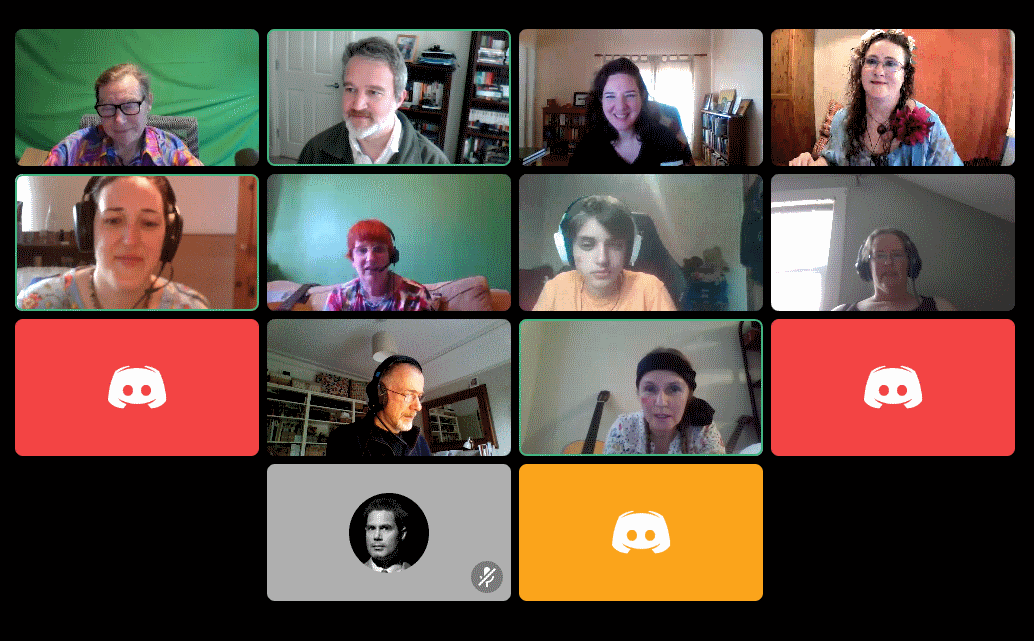 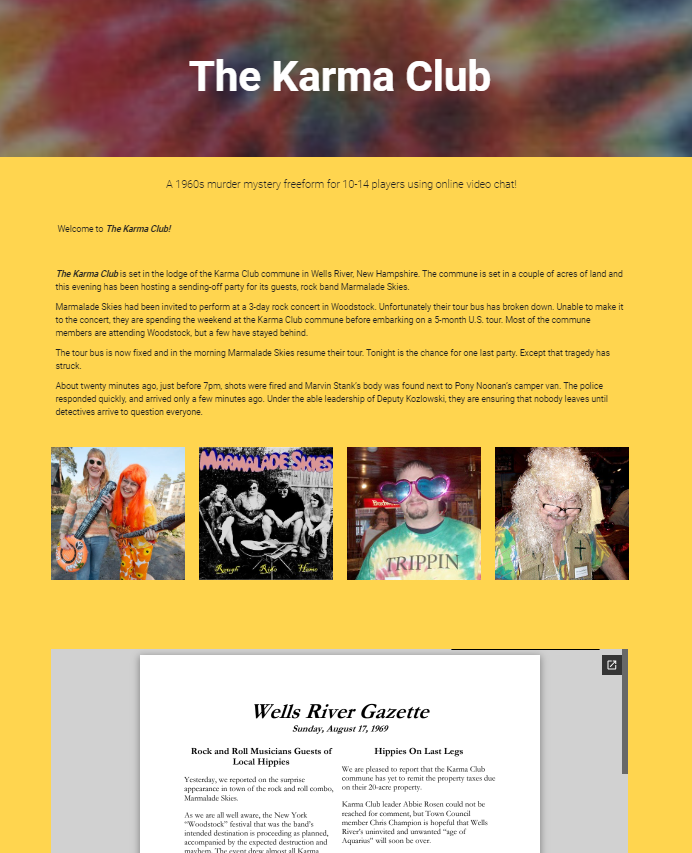 One of my guests didn’t have a Facebook account, which was a bit tricky. Luckily he was living with one of my guests who did, so she passed messages on.

Some guests didn’t get all the announcements - so it’s worth asking everyone to make sure that they are receiving notifications from the event (you can set this manually in Facebook).

Casting: I used Google Forms to create a casting questionnaire, which you can see here. I used that to cast the game.

Character information: I created Google Drive folders for each character, and added to that folder their character sheet, the background, their items and money and any other information that character started with.

Then, a few days before the game, I shared the folder with that character’s player. I had links on the web-page so that each player could just click through to their character sheet.

Items and Money: I used the Windows Snipping Tool to create png files of the items and money, and I put them into the Google Drive folders for each character. Because there are quite a few duplicate items (several notebooks and lots of individual money cards), I gave each file a unique number. So the money was “USD100-03.png” and “USD100-45.png” and so on.

The reason for doing this was to make it easy to move money from one folder to another, without creating file permission problems. (More on that below.)

Online video chat system: My original plan was to use a number of Jitsi video chat rooms (a bit like Google Hangouts) but will cater for more people. However, we ended up using Discord.

Whichever system you use, if possible get players to change their usernames to their character names - that makes it much easier in the game to work out who to talk to.

In terms of game spaces, I had a “common room” where we all started and finished the game, along with a number of other spaces (Ben’s room, the kitchen) where players could meet for private discussions.

I also set up a “Host desk” for when players wanted to chat to me as host, away from others.

Just before the game

I had planned to be online 15 minutes before the game started to help sort out any technical issues. That wasn’t nearly long enough…

Although I had set up some Jitsi rooms, they just weren’t working. I don’t know if there was a problem with the Jitsi servers, or it just wasn’t playing well with some of the computers that my players were using. But it was unusable.

As some of my players had used Discord, and once was experienced enough to quickly set it up, we moved to Discord and the game worked absolutely fine there. We lost about an hour sorting that out though.

Next time I will suggest that we meet the day before to iron out any glitches - and maybe have something like Zoom ready as a standby.

Introductions: Thanks to the panicky start and moving to Discord, I messed up my introduction. We were all keen to get started, and I didn’t have a plan. So I just read out the host’s introduction from The Karma Club and let everyone start playing.

What I didn’t do is work out what I wanted to say about how the rules and mechanics were going to work in the game. (A combination of me forgetting and also me assuming that everyone had read the instructions I had sent out earlier.)

What I will do next time is:

Playing the game: In terms of playing the game, Discord was great. The players started talking to one another and moving to other rooms where they could talk quietly.

I spent most of my time in the common room, answering the occasional questions. Much of the time I was moving items and money around - the plot pretty much took care of itself.

I had a second host to help me - and they mostly moved around the rooms and listened to the conversations.

Abilities: The characters in The Karma Club all have abilities. Normally in a face-to-face game the players would show their abilities to each other so that they can see the effect. In this case I had asked everyone to print out their abilities and hold them up to their webcams when they wanted to use them.

Naming locations: I had set up the rooms with names such as the kitchen, the vegetable patch, Bob’s room, and so on. This was intuitive and worked fine for most of the time, except when it came when some of the players wanted to hide something in another player's room. Instinctively they went there to hide the item, and as luck would have it I had overheard this and moved with them, where I was able to adjudicate and make a note of what they had done. If I hadn’t been there that might have been unsatisfactory for them.

So I either needed to make it clear how to interact with the setting, or rename the rooms so that they’re a bit more abstract (at the table, a sunny corner, outside in the sunshine, a quiet corner, a quiet space, and so on).

Moving items and money: As with a lot of Freeform Games, quite a few objects and money cards ended up changing hands. To do this, the person giving the item simply told me who they wanted to give the item to - and I just moved the items and money using Google Drive.

I had to remember to move the files, not copy them. Copying them would have created lots of other problems. 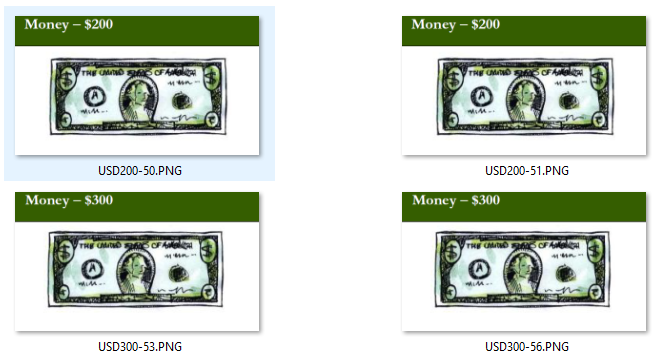 Ending the game: When I am hosting a face-to-face game I can often “read” the room and work out when the game is starting to run out of steam. I didn’t get that this time because everyone was in separate rooms. So instead I just used the game timeline, and told everyone in good time when it was due to end.

At the end of the game we all convened in the common room. I asked everyone to type into the chat who they thought was the murderer. I think about 30% of the people guessed correctly, which is pretty good.

Then I read out the solution, and that was where we ended up.

Overall I think running The Karma Club was a success. In fact I was so happy with it that I may well run more of these games even when lockdown is over and life is back to “normal”. It won’t ever completely replace running a game face-to-face, but it’s a lot better than not playing at all!

And it does mean I can run games for people I would never normally meet!