The Karma Club is a 1960s hippy-themed murder mystery party for 10 to 14 guests (plus one host) published by Freeform Games.

(I will also earn commission if you buy The Karma Club.) 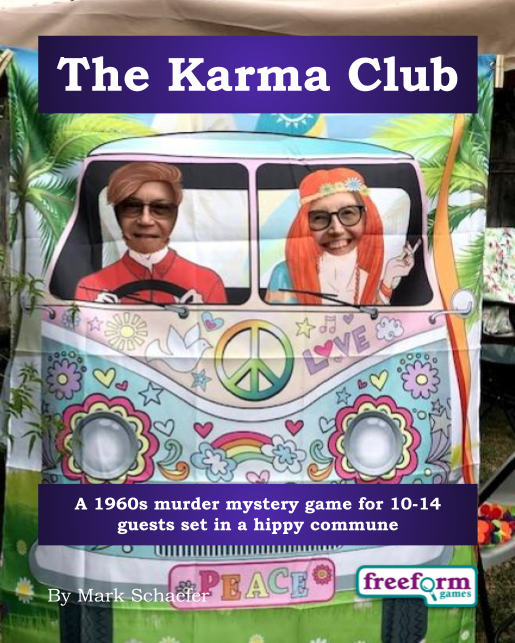 The commune has been hosting a sending-off party for their guests, rock band Marmalade Skies.

However, the evening has taken a turn for the worse and Marvin Stank, the band's manager, has been murdered...

how the karma club works

The Karma Club is an interactive murder mystery game, so all the players receive complete details of their character, including a detailed backstory, objectives that they must try to achieve, and information about other characters.

Characters also have item cards (that represent contracts, a diary, a record collection and so on), and abilities (that let them detect secrets find out information about other people).

The Karma Club has a number of different plots to keep everyone busy such as:

The cast of The Karma Club includes:

Instead of a formal dinner party, The Karma Club is better suited to a buffet meal or finger food.

The Karma Club needs a dedicated host, someone to organise the game.

how to get the karma club

The Karma Club is available from Freeform Games and costs $29.99 USD.

For more information about The Karma Club, click here to download the free introductory pdf file which includes more details - including background, a full cast list, costume guide and invitations.

Disclosure: I am a partner at Freeform Games - feel free to ask me lots of questions! (I will also earn commission if you buy The Karma Club.)