Here you will find tips for playing an interactive murder mystery game - everything from dressing the part to what to do when you find yourself at a loose end.

(Click here if you're looking for tips for hosting a murder mystery game.) 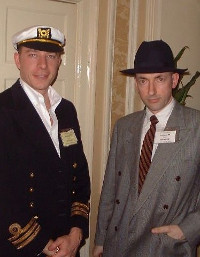 Pretending to be someone else...

In an interactive game you pretend to be someone else (your character) in a fictional setting. You interact with other characters and everyone will be trying to achieve their own goals. There's no script – it’s up to you to achieve your character’s goals.

Here, then, are some tips on how to play an interactive murder mystery game.

If you can do that, you should have no trouble!

You should receive some information about your character before the event - use that to find an appropriate costume.

A good costume can help you get into the spirit of the game, and also means that you will be in lots of photographs.

Your character sheet explains who you are, who you know and what your objectives are for the evening.

However, your character sheet describes what your character believes, but what they believe might not necessarily be true! (For example, you might be told that the secret agent known only as "007" is a man - but you might meet someone who believes that 007 is a woman. You will only find out who is right as the evening progresses.)

Keep your character sheet handy as you may need to refer to it during the evening (I find I usually do).

Yes, you need to read your character sheet more than once.

This time, think about your objectives (more on those in the tip below).

You should also take note of other characters - you will probably need to speak to them sooner rather than later.

Once the game starts, you will need to talk to people whilst pretending to be your character.

The easiest way is to walk up to someone and introduce yourself as your character. If you don't know anything about them you can ask who they are and why they are here.

If you do know something already (you may have information on your character sheet, or someone else has already told you something about them) then you can ask them about that.

Usually in an interactive murder mystery game there will be characters who will help you. It's important to find them - although to get them to help you, you may have to help them in return.

As well as allies, you may have enemies. These are usually characters whose goals oppose yours. It's useful to identify those as well, so you can keep an eye on them.

It's not always obvious who your enemies are - so be careful.

Try to stay in character - don't start talking about football or movies or anything else that isn't part of the murder mystery.

It's more fun if everyone tries to maintain the illusion that you're all in a 1920s speakeasy, a Victorian archaeological dig or an African riverboat.

Read your character sheet yet again

If you find yourself at a loose end, find a quiet place to sit down and re-read your character sheet.

I've always found that there are thing's I've forgotten and upon re-reading it I realise that there's someone I haven't spoken to yet, or something I need to do.

Solving the murder (if there is one - a few interactive games don't even have a murder) is a matter of talking to people and picking up the clues.

Normally establishing a means, a motive and an opportunity will lead you to one of several suspects.

You should find that clues are scattered amongst different people and it's only by trading information and talking to others that you are likely to solve the murder.

Many murder mystery party games are designed to accommodate various groups sizes. If a character described in your pack is not present, they are likely to be non-essential and you should disregard any references to them. This will not drastically affect your goals or the outcome of the game.

If you think that a character is really important to you but you can't find them - then speak to the host and they should be able to help.

Finally, the most important thing to remember is to have a good time!