This page gives some advice for expert hosts and players on combining two characters into one - for those occasions when you haven't quite got enough players for your game. 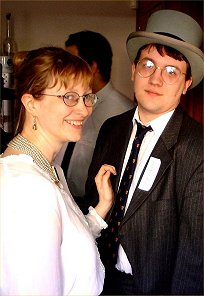 Playing two characters at once

I recently played in an interactive game that didn’t have enough players for all the characters.

As there weren’t enough people, some of the players (myself included) played two characters, alternating between the two as needed.

(I should point out that this was an unusual weekend-long interactive freeform-style event for about 60 people. I’m not talking about one of the murder mystery games on this site, although I’m hoping that the theory might apply.)

I found the experience very enjoyable - if a bit crazy at times. But that’s crazy in an enjoyable way.

As a result, it’s occurred to me that if you really want to run one of the larger murder mystery games and you don’t have enough players, then you might consider giving one or more players two characters to play.

So based on my (admittedly limited) experience, here are some tips for combining characters:

You could also try this even if you have the minimum number of players but you want to use some of the optional murder mystery characters.

Another idea (and I’ve yet to try this) is that if you have some characters left over after casting, then you "merge" two characters into a single character.

That removes the need for different costumes, swapping namebadges and worrying about keeping items and money apart.

Here’s how I’d choose the characters:

And here’s what I’d then do:

If I had lots of time I’d merge the characters properly - I’d create a single name badge and edit everyone's character sheet to refer to the new character. However, it’s much more likely that I won’t have time for that!

Tell me how it goes

All this is very experimental - I’ve not tried either of these ideas (yet) with a “regular” murder mystery game so I’m very interested if you do try it.

Click here to tell me all about it via the “your stories” form on this page.