This article provides tips for throwing a murder mystery party as a surprise for someone.

is it possible to throw a surprise murder mystery party? 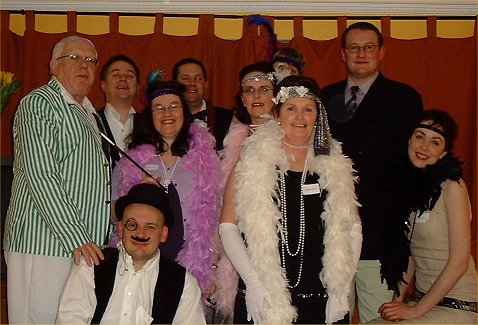 The Final Curtain - suitable for a surprise party

Well, the short answer is, yes, it is possible to throw a surprise murder mystery party - even an interactive one.

But before you do so, there are a few things that you need to consider to make your surprise party a success.

Yes - but not for everyone

It's probably very hard to throw a surprise party for everyone - as you're unlikely to get everyone to turn up.

And one of the things that can really kill an interactive murder mystery party is if you don't have enough people.

Sometimes you can muddle through, but more often than not you're better off not trying at all.

So if it's going to be a surprise party, the surprise ought to be limited to one or two guests-of-honour only. (This sort of thing typically happens to celebrate a birthday, and that's what I'm going to assume from here on.)

There are a few potential pitfalls with a surprise interactive murder mystery game - here are some (and my suggestions for overcoming them).

Perhaps the trickiest part of throwing a surprise murder mystery party is getting the guest-of-honour into character.

Most of the interactive games have various bits of background that are sent out with the invitations.

For example, the invitations for A Dead Man's Chest includes a cast list, a newspaper and details for how to play the game.

Most of the guests will have read this, but the person that you are surprising won't have the benefit of this - so they've got to read all of that and their character details as well.

The first is to spring the surprise an hour or two early, and give the guest-of-honour a chance to read the background so that they can really get into character.

The other option is to choose a game that isn't too complicated - that makes it relatively easy to catch up.

For this I suggest one of the following (click through to read more about each of them):

The Auction - Bid for the von Munchen relics in this modern-day game for 12-40 people.

The Final Curtain - Disaster strikes the Littledean Theatre Company in 1926. For 7 to 20 people.

Costuming can be an important part of some murder mystery parties.

So if you're throwing a surprise murder mystery party, you may need to think about a costume for the guest-of-honour.

If necessary you may need to hire something - and if that's the case you will need to take someone who's approximately the same size as your guest-of-honour to ensure it fits.

If you're throwing a surprise party for a guest-of-honour, it is tempting to invite all sorts of people that they haven't seen for ages.

The problem with this is that some of your players may be very tempted to spend the evening chatting and catching up with each other rather than involving themselves in the murder mystery.

To overcome this you can restrict your guests to people who see each other regularly.

Alternatively, you could schedule part of the party for chatting and catching up (perhaps during a meal break and after the game) - but this will mean that your party will get longer.