Alcohol and murder mystery parties - do they mix?

Should you serve alcohol at your murder mystery party? Here are my thoughts... 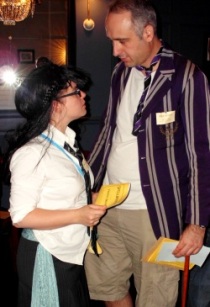 You can't tell it from here, but we ran this game in a pub. So of course there was alcohol!

helping my lack of ease

I recently read Watching the English by Kate Fox, an absorbing anthropological study into the English and the rules of Englishness.

Watching the English covers all aspects of English life - queuing, pubs, the weather, class, and so on. And I thoroughly enjoyed it - although I was a bit alarmed at quite how English I am!

One of the essences of being English is our lack of social ease - and our need for facilitators that help us interact and bond with others. Kate Fox doesn't explain why this may be (she admits that she doesn't know), just that lack of ease is a fundamental part of Englishness.

And while activities such as murder mystery games are facilitators, so is alcohol...

should you serve alcohol at your party?

Given that, should you mix the two? Should alcohol be served at your murder mystery party?

It sometimes seems to me that alcohol is almost a necessity for some people to enjoy murder mystery party games.

For many people to really get into the swing of a murder mystery (particularly the more interactive parties) requires dropping a few inhibitions, and a glass or two of wine might be just what some people need. (I know I loosen up after a glass of wine.)

So I certainly don't have a problem serving alcohol at murder parties.

In fact, I don't think I've ever played or hosted a murder mystery where there hasn't been a glass of wine to steady the nerves or loosen the tongue.

And I think the only time I didn't drink was when I was driving. (Be safe - don't drink and drive!) 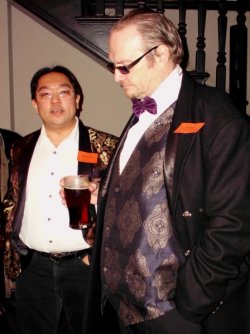 But not too much!

However, there is a fine line and, as Kate Fox points out, the English can be at their worst if they drink too much.

Certainly a party can be ruined when a guest drinks too much and starts to behave poorly.

As a host (and as a helpful guest) you should keep an eye out for anyone who looks like they may have had a drink too many - a quiet word may save an awful scene later on!

You can, of course, use beverages to contribute to your party's atmosphere by serving setting-appropriate beverages.

For example, The Night Before Christmas is set at a cocktail party - so get someone to mix a few martinis.

Mulled wine might be appropriate at Snow Business, which is set on a skiing holiday...

If you do serve alcohol, do remember to cater for those that don't drink and provide plenty of soft beverages- especially water.

Certainly, I can't drink wine all evening and need plenty of water to keep me going. Murder mystery games are thirsty work!

So my personal view is to serve wine at the murder parties I host, and I usually bring a bottle if I am attending.

But I don't go overboard - I've found that one or two glasses is sufficient.

I also ensure that there are provide plenty of non-alcoholic beverages- even if it's nothing more than jugs of water.

So, don't be afraid of serving wine with your parties, but do make sure that you have non-alcoholic alternatives, and please watch out for anyone drinking too much!