You don't have to have prizes at the end of your murder mystery game - but they are a lot of fun. 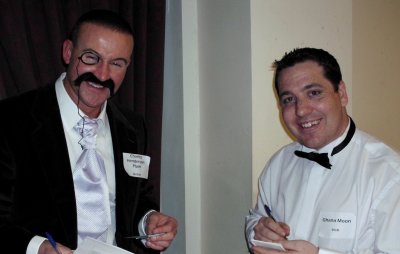 And the prize for Best Moustache goes to...

The prizes themselves might be a simple certificate (you can get these from office suppliers), a box of chocolates, bottle of wine - or something more suited to the game itself.

Some games include competitions

For example, in The Last Gasp the player who has the most money at the end of the game wins a prize.

However, those who start out with money aren't eligible for the prize. If you want everyone to be eligible, you could calculate how much everyone has increased their wealth by. So if you end the game with £200 but started with nothing, you've done better than someone who ends the game with £300 but starts with £400. (This does require a small amount of maths - but not much.)

Let the players decide who gets a prize

When it comes to deciding who wins a prize, my preference is to let everyone vote for them.

If I am including prizes in my murder mystery game I therefore include a voting form in each character envelope. The voting form would have all the categories listed above on it.

At the end of the murder mystery the guests hand them in for counting - and then it's prize-giving time.

Prizes add a fun element to a murder mystery party and can help draw the event to a satisfactory close.